Cost of Living in Germany - A Guide for International Students

One of the most important things to consider when moving to a new country is how much it’s going to cost to live there.

You may have considered big costs like travel and rent, but you also need to think about daily costs - things like groceries, eating out, and buying clothes.

The good news is that despite Germany being one of the most popular travel destinations, the average cost of living in Germany for international students is relatively low.

In this guide, we’ll take you through the general costs of living in Germany as a student, as well as how the costs vary depending on the city.

What is the cost of living in Germany?

If you’re moving to Germany as an international student, one of your first questions will probably be ‘Is Germany expensive?’. The answer is, not compared to other cities!

Similar to professionals, the cost of living differs from one city to another. So the costs of living and studying in Munich would be much higher than in Cologne, Mainz, or Potsdam. The cost of living in smaller cities tends to be lower than bigger ones.

When compared to other popular student destinations in Europe by Expatistan, the cost of living in Germany is much lower than in cities like London, Paris, and Amsterdam.

The most expensive German city on their list was Frankfurt, which was 16th. Cologne, where CBS is based, was 27th on the list. So it’s good news for the students joining us on campus!

The general, average costs of living in Germany per month for a single person are as follows:

Food and groceries will be an important, and consistent, part of any student’s weekly budget. Luckily, in Germany, you won’t have to worry about these costs being too high.

When compared to other European countries, food prices in Germany are considered to be quite low. This is mainly because we grow a lot of our own produce, and have plenty of competing supermarkets that keep costs for customers low.

If you’re just shopping for yourself, you could easily do your weekly food shop for around €50 - less if you’ll be sharing your food with a partner or friends. This means that the average cost of food per month in Germany for a student would be about €200. The main items that could increase this cost would be things like meat and alcohol.

In Germany, we have plenty of supermarkets that you can choose from, including a number of discount stores where you can save even more money.

Here are some of the most common supermarkets you’ll find in Germany:

In addition, there are also online supermarkets that deliver food in 10 minutes. Those however tend to be more expensive.

The prices of individual items will vary depending on the city you’re living in and the supermarket you’re shopping in. To get a better idea of how much money you’ll be spending on food, here’s a quick guide to the prices of some common food items in Germany:

When you move to Germany, there are a lot of different transportation options. If you’re in one of the large cities, you can choose between the tram, train, bus services, and metro services.

Here are the prices of monthly travel cards in some of the major German cities:

For students studying in Germany, you’ll commonly be asked to pay ‘Semester Contribution Fees’ to your University. This is a relatively small fee that you pay each semester and provides you with a ‘Semesterticket’.

What is a semester ticket in Germany?

This is your student ID which qualifies as a transportation card that allows you to get on any public transport for free - it lasts for the entire duration of the semester.

At CBS, our students pay €300 per semester which gives them the following:

Here you can find more information on our tuition fees

Depending on where you choose to live, you may have to pay extra for utilities on top of your rent. Utilities costs will include things like internet, electricity, and TV.

This cost will vary between cities and different types of accommodation, but you should budget around €200 a month as an average cost of utilities in Germany. This could be lower for students, depending on the type of accommodation. Most of the student halls and apartments have all-inclusive rents including internet, electricity & TV.

It’s important to make sure you have your health insurance covered when moving to a new country. In Germany, an international student will likely pay around €110 per month for insurance with a public health insurance provider.

Some of the most popular public health insurance providers that international students can use are:

If you want to keep the money you spend on rent low, the best option would be to live in shared student accommodation. This way, you can expect to pay around €300 a month.

Student halls and residences are typically the cheapest forms of accommodation in Germany. However, in order to get a room, you’ll have to apply as early as you can - the waitlists can be very long!

If you’d rather live alone, the average one-bed apartment in a city starts at around €700 per month.

Here’s a rent comparison by city in Germany for a one-bed apartment:

We’ve started off by giving you an overview of the general costs that are associated with living in Germany, but all of these costs depend on where in the country you live - some cities are more expensive than others!

Below you’ll be able to find the living costs for a range of major German cities. This will help you to plan out your budget and decide how much money you’ll need to bring with you when you arrive in the country.

Cost of living in Cologne

Cologne is one of the major cities in Germany, and one of the most popular study destinations for international students in Germany due to its affordable living cost, and authentic living atmosphere.

There are lots of places to eat out and socialise in Cologne. These things can increase your living costs, but if you do your research you’ll easily be able to find a place that's more affordable.

Cologne has a huge student population and is the home of our CBS campus, so there are lots of affordable places for students to visit.

Here’s an example of some of the daily costs you can expect while living in Cologne:

Cost of living in Berlin

Berlin is a relatively inexpensive city to live in, which is great news for students! In Berlin, you can expect to pay around €1,833 if you’re a single professional or €850 for students. This is right in the middle of the German average of €800-1000 a month.

The cost of living in Berlin is actually cheaper than 62% of the countries in Western Europe, which is why it’s such a popular study destination. It’s also only half an hour by train away from the CBS campus in Potsdam!

Here’s an example of some of the daily costs you can expect while living in Berlin:

The cost of living in Berlin is estimated to be:

Cost of living in Frankfurt am Main

Frankfurt am Main is one of the most expensive cities in Germany to live in, it’s second only to Munich. As someone moving to Frankfurt on your own, you can expect to pay €2,339 a month if you’re a single professional and around €900-1000 for students.

Frankfurt is a major financial hub in Europe and also very close to another one of our CBS campuses in Mainz.

Here’s an example of some of the daily costs you can expect while living in Frankfurt:

Cost of living in Düsseldorf

Düsseldorf is a city famous for its fashion industry and creative scene which draws a lot of students and young people. It’s also very close to our Cologne campus - only a half an hour train journey away!

Here’s an example of some of the daily costs you can expect while living in Düsseldorf:

Cost of living in Bonn

If you’re planning on moving to Bonn, you can expect to pay about €1,750 for your living costs if you’re a single professional, but will be slightly less if you’re a student - typically around €850-1,000.

One of the best things about moving to Bonn is the impressive transportation links. It's very easy to travel around Germany and other countries in Europe from here. It’s also an hour away from our CBS campus in Cologne.

Here’s an example of some of the daily costs you can expect while living in Bonn:

Which German city is the most expensive to live in?

The most expensive city in Germany to live in is Munich. This is mainly because the rents are very high - it’s hard to find a one-bed apartment for less than €1000.

Munich is the 3rd largest city in Germany and attracts a lot of people and students, this is what keeps the prices pretty high.

However, if you’re a student moving to Munich there are ways to lower your living costs. You can do this by living in student accommodation, taking advantage of student discounts, and not eating out so often.

Which German city is the cheapest to live in?

You may be surprised to hear that out of the popular student cities, Berlin is actually the cheapest - even though it’s our capital city!

The prices can vary for rent which may affect your living costs, but socialising and eating out can be pretty cheap. There are numerous options when it comes to nightlife and street food, all of which will be affordable for international students.

Some of the other cheapest cities in Germany for international students are Bonn, Mainz, and Aachen.

How to cover your expenses while studying in Germany?

If you need some help covering your cost of living in Germany, you can see if you’re eligible for Financial Aid.

You can read our guide on Financial Aid for international students here if you’d like more information.

International students are also allowed to work while studying in Germany to help cover living costs - just remember that there are limits on the amount of hours you’re allowed to work.

If you’d like more information on this, you can read our in-depth guide on working in Germany as a student.

We hope that our guide to the cost of living in Germany was useful for students who are planning to join us soon! It should give you a good idea of how much you can expect to pay for your living expenses in Germany, no matter what city you’re moving to.

If you’d like to continue learning about Germany and studying at CBS, you can visit our undergraduate and postgraduate degree pages, or get in touch with one of our student advisors, or attend one of our info sessions. 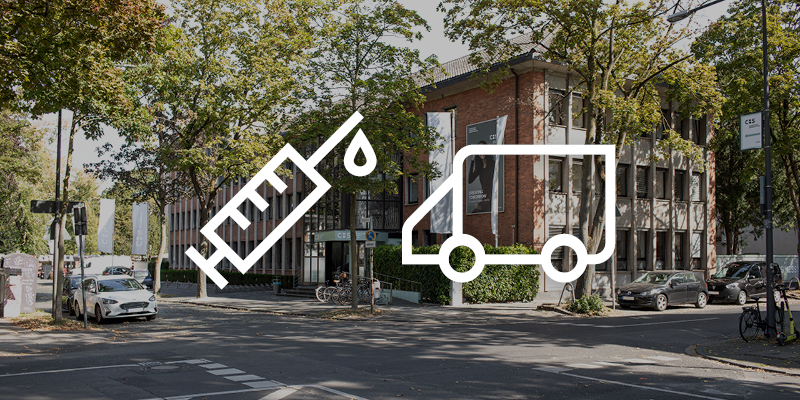